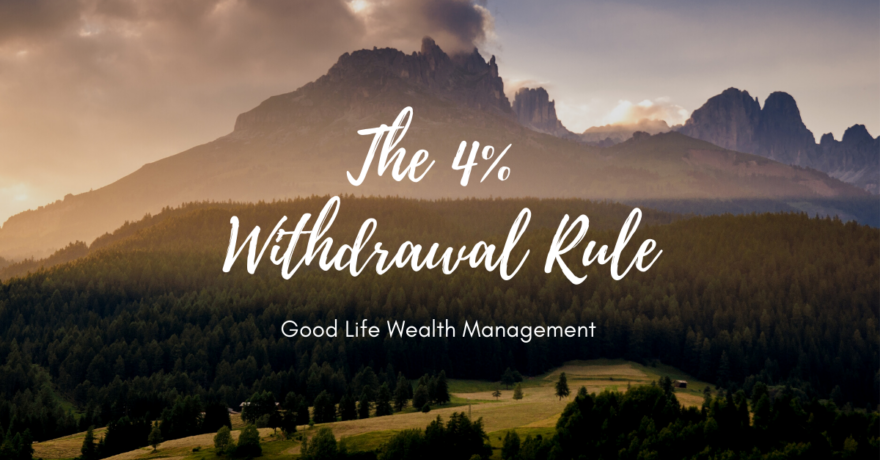 Many retirement income projections are based on the work of William Bengen, a financial advisor who created the 4% withdrawal rule. Today, in part three of our five-part series on creating retirement income, we look at Bengen’s 4% Rule and what it can mean for your retirement.

Bengen looked back at the history of the stock and bond returns and considered a 30-year retirement period. Since inflation increases your cost of living, he assumed that retirees would need to increase their retirement withdrawals annually. He then calculated, for every period, the maximum withdrawal rate that would have lasted for the full 30 years, adjusting for inflation.

He examined this for every 30 year period with available data. For example, 1930-1960, and then 1931-1961, 1932-1962, etc. all the way up to the present. In the all 30-year periods, retirees were able to withdraw at least 4% of their initial sum. In the worst case scenario, retirees with a $1 million portfolio could withdraw $40,000 in year 1, and increase it every year with inflation. This is the Safe Withdrawal Rate, or SAFEMAX as Bengen called it.

Interestingly, Bengen did not name this the 4% Rule. In interviews with reporters, they started calling it the 4% Rule and the name stuck.

Bengen originally used a simple two asset portfolio using one-half US Large Cap Stocks and one-half US Intermediate Treasury Bonds. He assumed annual rebalancing, which helped with stock market volatility. He found that the 4% Rule would work with about one-half to three-quarters invested in stocks. With higher allocations to stocks, the portfolio became more likely to implode during bear markets. And with higher allocations to bonds, the portfolio could not keep up with the inflation-adjusted withdrawals. So, the sweet spot for a retirement allocation seemed to be from 50/50 to 75/25.

In the majority of 30-year periods, the potential withdrawal rate was much higher than 4%. In a few periods, it even exceeded 10%. The 4% rate was the worst case scenario. 4% worked for all of the 51 different 30-year periods starting in 1926 that Bengen considered in his original paper. At a 4% withdrawal rate, your money actually grew in most of the periods. If you started with a $1 million portfolio and took 4% withdrawals, your portfolio would have actually exceeded $1 million, 30 years later, in the majority of cases.

Later, Bengen added Small Cap stocks to the mix, with a portfolio of 30% large cap, 20% small cap, and 50% bonds. With this portfolio mix, he found that the safe withdrawal rate increased to 4.5%. Bengen considers this work to replace his initial 4% Rule. Unfortunately, the name had already caught on and Bengen will forever be known as the creator of “The 4% Rule”, but he would rather it was called “The 4.5% Rule”.

There is definitely room for higher withdrawals than 4%. The problem is that we don’t know what future returns will be and we don’t know the sequence of returns. So, the safest bet remains to start at only a 4% withdrawal. For people who retire before age 65, we may want to plan for a longer potential horizon than Bengen’s 30 year assumption. A longer retirement might require a lower rate than 4%.

The 4% Withdrawal Rule is a good rule of thumb for retirement income. When we use other analytical tools, such as a Monte Carlo evaluation, it often generates results similar to Bengen’s rule. If you want to use a 4% rate, your nest egg needs to be 25-times your annual needs. This is a very high hurdle for most people. It’s incredibly challenging for most Americans to save 25 times their annual expenses during their working years.

So while it is a conservative way to calculate retirement income, the 4% rule may make people over-prepared in most periods. As a result, people could have spent more money in retirement. Or they could have retired years earlier, but waited to accumulate enough assets to meet the 4% Rule. That’s a flaw with the 4% Rule.

The other weakness is that it is based on history. Just because it worked in the past century is no guarantee that it will work in the future. For example, if we have very low bond yields, poor stock returns, or higher inflation, it’s possible that a 4% withdrawal fails. One researcher, Wade Pfau, tried to apply the 4% Rule to investors in other countries. He found that it didn’t work for every country. We have had a really good stock market, and low inflation, here in the US and that’s why it worked historically.

Bottom line: the 4% Withdrawal Rule is a good starting place to understand retirement income. But we can do better by having a more dynamic process. We can adjust withdrawals based on market performance. Or you can delay or reduce inflation adjustments. We can avoid selling stocks in down years. All of these strategies can enhance the 4% rule and potentially enable you to start with a higher withdrawal rate. We will consider two such strategies in the next articles, considering Guardrails and a 5-year Bucket Approach.

Bengen is retired now, but still writing and continuing his research. He realized that his initial research left a lot of money on the table for retirees. Two months ago, he produced a new article looking at stock market valuations and inflation to refine the initial withdrawal rate. If you are retiring when stocks are expensive, future returns are likely to be lower, and you should start with a lower withdrawal rate. If stocks are cheap, you might be able to start with a higher withdrawals than 4%. Bengen believes this new process could calculate a safe-withdrawal rate of 4.5% to 13%. (The present calculation using his new method is 5.0%.) Time will tell if his new research gains wider acceptance, but for now, he will be best known as the father of the 4% withdrawal rule.