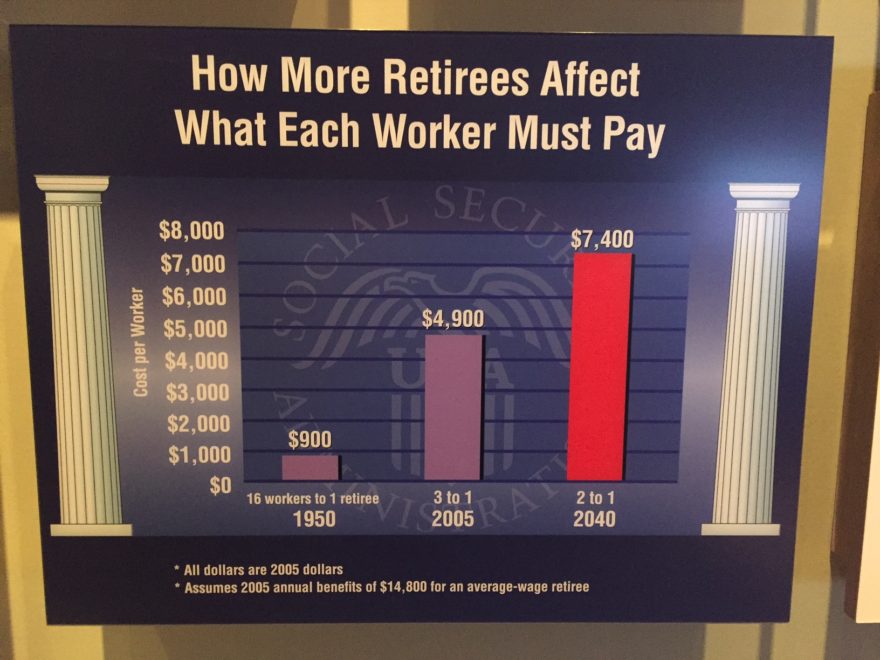 It seems like the Internet Age has helped create a culture of instant gratification, short attention spans, and sound bites. There is less interest and patience for detailed discussions, long-form journalism, or acknowledging the complex trade-offs of decisions. We have moved into a post-factual world where the truth gets less airplay than spin. Politically, everything is black and white, right or wrong.

Frequently, I see people posting political comments or memes on Facebook about Social Security. These posts are meant to make the other party look like villains, but are often factually incorrect, incomplete, and short-sighted. I avoid getting sucked into these unproductive conversations, but many people could use a better understanding of the numbers and reality of our situation.

We should be having a real, adult conversation about Social Security. It is the future of not only retirement planning, but of our country’s prosperity and debt. I hope this primer below will make the case for why we need to reform Social Security and the challenges we face.

First, it is a myth that Social Security saves your contributions. Social Security is and always has been an entitlement program, like Welfare or Food Stamps. Current taxes are used to pay current benefits. The Social Security taxes you paid in 2015 were paid out to Social Security Beneficiaries in 2015. None of that money was saved for you.

Because of post-WWII demographics, there was for a very long time, a Social Security surplus. They took in more payroll taxes than they paid out in benefits. That annual surplus was invested in the Social Security Trust Fund, to pay a portion of future benefits. It was never the intent or expectation that the Trust Fund would cover all future expenses.

For decades, the Trust Fund saved this surplus. However, in the 1970’s politicians looked for a way to close the budget gap and decided to spend the Trust Fund and replace those assets with IOU’s in the form of Treasury Bonds.

Several years ago, the annual Social Security surplus disappeared and became negative. Today, there is a short-fall where current OASDI taxes are insufficient to cover benefits paid. The short-fall is presently being covered by the Trust Fund through cashing in their Treasury Bonds. This is where all the Facebookers get things wrong – Social Security does have an impact on the deficit. Benefits which are paid from the Trust Fund are now part of our national debt, as new bonds are issued to replace those cashed by the Trust Fund.

There are a couple of reasons why this has happened. Demographically, the Baby Boomer generation is enormous and there are thousands of people who are starting benefits every day for the next two decades. When Social Security began, the life expectancy at birth was only 65. Today, if you are already 65, the typical beneficiary will probably live another two decades. The retirement period being funded by Social Security has swelled from a couple of years to 20, 30, or more years because of our increasing longevity.

What originally worked in 1935 isn’t possible with today’s population. Every year, the Trustees tell Congress exactly how to fix Social Security. There are only two options: increase taxes or decrease benefits. There is no magic unicorn of preserving promised benefits and not raising taxes. That’s not how Math works. So when a politician promises that they will not lower benefits, they are either in favor of higher taxes or they are just blowing smoke. If they ignore the issue for long enough, it will become their successor’s problem.

Seniors vote and turn out better than any other age group. Politicians and candidates know this. The easiest attack in politics is to say that your opponent wants to “take away your Social Security check”. Up to this point, that war cry has silenced every politician who has proposed Social Security reform, including the bi-partisan Simpson-Bowles commission which came up with comprehensive solutions.

The present approach from politicians is the worst for America: kick the can down the road and let someone else fix it. Parties are too concerned with maintaining their seats over the next two years (or taking them back), to be willing to think longer-term than the next election cycle. The longer we wait to address the short-fall, the more drastic steps will be required.

Simpson-Bowles proposed increasing the Full Retirement Age from 67 to 69 over several decades. This would have had zero impact on current retirees and gave 20 years notice to future retirees. But even this small change brought the full opposition of the AARP, and ultimately none of the commission’s proposals were ever enacted.

Presently, workers and employers pay OASDI taxes on the first $127,200 of earnings (2017). Raising the income ceiling on Social Security taxes will not be sufficient to fully fund benefits, even if we were to eliminate it entirely. There will probably need to be some reduction in benefits if we are to avoid increasing taxes significantly on all workers. But that doesn’t mean that everyone will see their benefits plummet. Ways to reduce benefits include:

By the way, increasing immigration and the population of younger people would help retirement programs like Social Security. Look at a country like Japan, which has an even higher percentage of retirees than the US, to see the challenges of financially supporting a large segment of the population. The money that is spent on retirement programs, or to finance the debt of those programs, crowds out other government spending which might be better for economic development.

There is no quick fix or easy solution to save Social Security, but it’s time we expect more from our politicians. Fixing Social Security and Medicare will not be easy or painless, but we need to be thinking now about how we can preserve these programs and ensure their viability for younger workers and future generations. Become an informed voter and be on the lookout for when politicians are using issues as ammunition to lob at their opponents, rather than looking at solutions for America. Likes is the one of the most important reactions that a TikTok creator can get for their videos. You feel much more appreciated, when you notice a dramatic growth of the number of free TikTok likes you get. Obviously, TikTokers of all levels are looking for the opportunities to increase the number of likes they get. In this article we will share this information! Here are some tips: Catchy description; Follow the trends; Post videos daily and Paid Promotion. Paid promotion is one of the most effective ways to get more TikTok likes. However, choose the trusted providers wisely, such as tiktoknito.com.

7 Ways for Women to Not Outlive Their Money