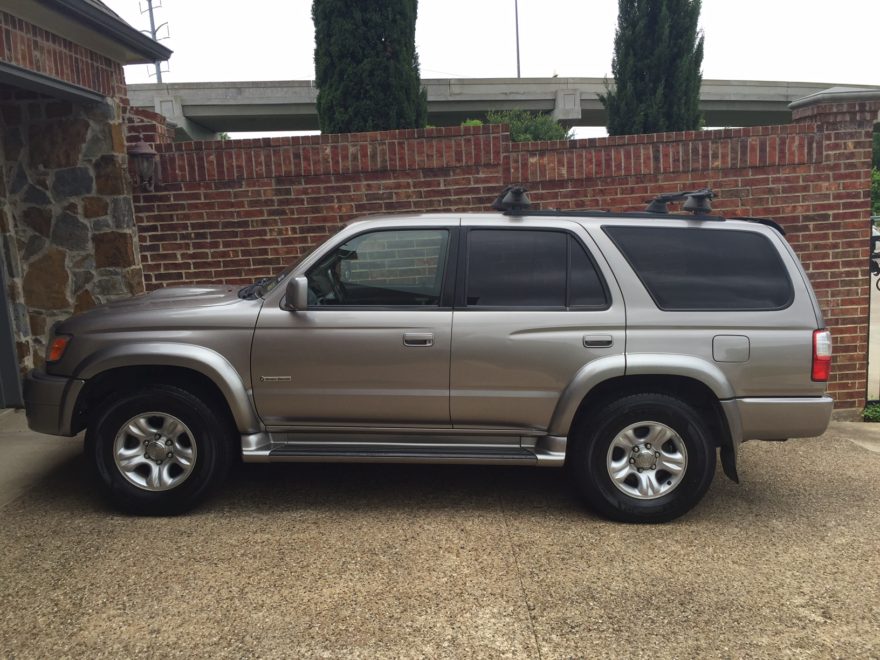 Some people in Dallas pour more money into new cars than they do their investments and financial future. They get a new luxury car every three years, but tell me they cannot afford to put $5,000 into an IRA. I think their priorities are backwards! To sink our hard-earned cash into a depreciating asset will keep us poor and stressed, rather than allowing us to enjoy the peace of mind of financial independence.

Last night, a friend was asking me whether he should fix up his 10-year old Toyota (facing a $400 expense) or buy a new car. Previously, I have written in this blog about my real costs of buying a high-mile used car. Three years ago, I purchased a 2002 Toyota 4Runner with 179,000 miles for $4,500. Seems like an invitation to disaster and disappointment, right? Well, here’s how things turned out…

I sold the 4Runner last fall, after two years of ownership, with 197,000 miles on the odometer. During my ownership, it never broke down and always started on the first try. It was completely dependable and there were no unexpected repairs, only routine and preventative maintenance. I sold it for $4,150, my full asking price on a (free) Craigslist ad, to the first person who looked at it.

That means that over the two years, my total depreciation was $350. I cleaned the car meticulously before selling, and you truly can polish money into a car. If it looks great and you can show detailed maintenance history, you will do well.

While my depreciation was very low, I had maintenance expenses over the two years. The biggest expense was a set of four new tires, $744.84. (Those are some big tires, 265’s!) The rest of the work I performed myself and included: four oil changes, replacing the rusty radiator, hoses, and thermostat, changing the differential oil, steering fluid, and brake fluid, wipers, air filter, PCV valve, two indicator bulbs, and one headlamp. Sounds like a lot, but most of those are 5-minute jobs. My total spend on maintenance over two years was $574.33.

The average car on the road is over 11 years old, but many of us still hate older cars. It is definitely a headache when a car breaks down and leaves you stranded, but that can happen even in a new car. From a behavioral perspective, the inconsistency in our thinking is that we have such a strong aversion to paying for unexpected repairs but are so willing to accept the known and inevitable loss of depreciation.

Why is spending $1,000 on a repair so much more painful than losing $4,000 in depreciation over a year? Depreciation is the bigger expense. Almost every new car will lose 50% of its value in 5 years. By 10 years, you will have an 80 to 90 percent loss.

The reality is that today’s cars are more dependable than ever. When you trade in your 8 year old car with 100,000 miles, chances are that someone else is going to drive that vehicle for another 8 years and another 100,000 miles. But you will have paid 80% of the depreciation!

Now, I realize that a sample of one (my experience with one 4Runner) does not prove a statistical case that all used car purchases are going to be effortless and inexpensive. It is entirely possible that I was just lucky. The car could have blown up the day after I bought it and I’d have lost my $4,500 investment. Fortunately, it did not, but that is a gamble I can afford to take.

My advice remains that the least costly course of action is to keep your current vehicle for as long as possible so that you can spend years on the flat end of the depreciation curve. Maintenance costs should not be unexpected, even though the timing and amounts are always unknown. The key is to remember that your repair costs are still likely to be a fraction of the depreciation costs of a new car. When you have to get a new vehicle, consider a used car and let someone else pay the steep depreciation of the first 3, 5, or even 10 years of the car’s life.

I know rationally that keeping cars for 10+ years is the best option, but truthfully, I get bored with cars. If you are fine with the same vehicle for a decade, that is fantastic. You are undoubtedly being very smart to keep one vehicle for 10 years. But I’d rather get a different vehicle every couple of years, a habit which could get very, very expensive. Luckily for me, I don’t really care if a car is new or used, just that it is new to me.

When I sold the 4Runner, everything still worked and I could have kept on driving it. But I just wanted something different. I purchased a 2006 Mercedes E350 sedan with 123,000 miles for $5,300. Now I am not only flouting the conventional wisdom of avoiding older, high mileage cars, I am doubling down by going from a dependable Toyota with cheap parts, to a luxury car with very expensive German parts.

I’ve had the Merc for a few months and have already put on 5,000 miles, with zero issues. The engine seems quite strong and everything on the car feels very well made. Fingers crossed that it holds up! We’ve had a number of BMWs in the past and I always wanted a Mercedes. I’ve gotten a number of compliments on it, but I think people would be very surprised if they knew how little I paid for it! I expect that, unlike the Toyota, I will not do all the work myself and that my maintenance costs will be higher. I will continue to keep a spreadsheet and report back to you, my readers, and let you know how it turns out – good, bad, or ugly!